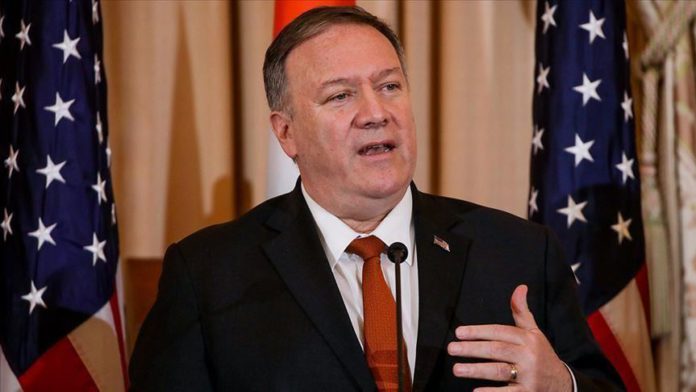 Secretary of State Mike Pompeo said Tuesday that the State Department is preparing for a second term for outgoing President Donald Trump after he lost to Joe Biden in the race for the White House.

“We’re ready. The world is watching what is taking place here. We’re going to count all the votes,” the top diplomat told reporters. “The world should have every confidence that the transition necessary to make sure that the State Department is functional today, successful today, and successful with a president who is in office on Jan. 20, a minute after noon will also be successful.”

Trump said earlier Tuesday “results” from his legal challenges to the outcome of voting in key battleground states will begin to emerge “next week.” He said on Twitter that he is “making great progress,” but did not comment further.

The president has repeatedly sought to cast doubt on the race being called in Biden’s favor by every major news outlet, including those close to him, like Fox News, and has blocked federal agencies from cooperating with the president-elect’s team on the handover of power.

The move comes 16 years after a bipartisan congressionally-formed panel tasked with investigating the shortcomings that allowed the Sept. 11, 2001 terror attacks to take place determined the shortened transition period to the George W. Bush administration in 2000 “hampered the new administration in identifying, recruiting, clearing and obtaining confirmation of key appointees.”

The transition that year was delayed by election disputes.

“The new administration — like all others before it — did not have its team on the job until at least six months after it took office,” the authors wrote. “Since a catastrophic attack could happen with little or no notice, we should minimize as much as possible the disruption of national security policymaking during the change of administrations by accelerating the process for national security appointments.”

Trump’s team, meanwhile, has vowed recounts in Georgia, Michigan and Pennsylvania, but the process rarely leads to a change in a declared victor.

The nonpartisan elections group FairVote found that statewide recounts only changed election results by about 430 votes. Biden leads far beyond that in each of the states in which The Associated Press declared him the victor.

In Georgia, where his lead is narrowest, Biden is ahead by 13,000 votes. In Pennsylvania and Michigan, Trump is trailing by more than 45,000 and nearly 149,000 votes, respectively.

Investigations “may be conducted if there are clear and apparently-credible allegations of irregularities that, if true, could potentially impact the outcome of a federal election in an individual State,” Barr said in a memorandum.

The attorney general did not identify any specific instances of alleged fraud in the memo.

Justice Department official Richard Pilger resigned in protest after Barr’s announcement. Pilger had served as the director of the Election Crimes Branch of the Department of Justice since 2010.

Biden: 'We're at war with virus, not with one another'

US no longer has role in peace process: Palestinians

October 12, 2020
We use cookies to ensure that we give you the best experience on our website. If you continue to use this site we will assume that you are happy with it.Ok