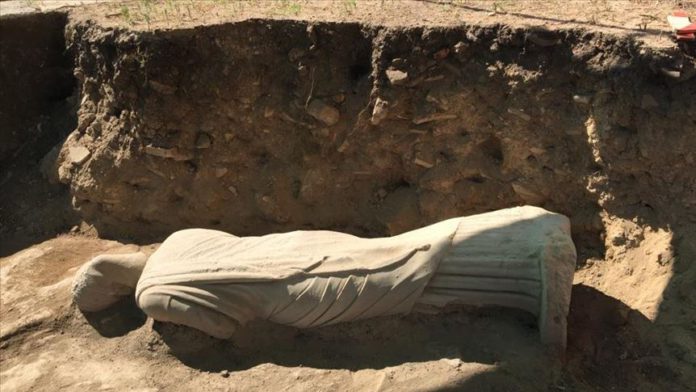 Archeologists unearthed on Monday a 1,700-year-old statue of a female from the Hellenistic period in the ancient city of Perge, now in Turkey’s Mediterranean Antalya province.

It shared separate photographs of the full-body statue of a dressed woman, and her broken head.

The excavations in Perge are headed by Sedef Cokay Kepce, an archeology professor at the Istanbul University, the ministry said, adding that the 3rd-century figure will be placed in the Antalya Museum once the work is complete.

The archaeological site in the ancient city has been excavated systemically by Istanbul University since 1946, and was added to the UNESCO Tentative Heritage list in 2009.

The city, according to the UN agency, is known for local sculptures, where women were active on an administrative level.

Copyright 2022 Anadolu Agency. All rights reserved. This material may not be published, broadcast, rewritten, or redistributed.

June 21, 2022
ANKARA The Turkish president and UN secretary-general on Monday spoke over phone and discussed initiatives aimed at resolving the ongoing crisis caused by the Russia-Ukraine...

June 21, 2022
BRUSSELS The EU and Egypt have agreed on the partnership priorities guiding their relationship until 2027. The Association Council of the European Union and Egypt...

June 21, 2022
TAL RIFAT, Syria / ANKARA The YPG/PKK terror group is using a sophisticated network of tunnels in the Tal Rifat district in northern Syria to...